Calvin Klein is a global lifestyle brand that was founded in 1968. Employing over 10,000 associates globally, it exemplifies bold, progressive ideals and a seductive, minimalistic aesthetic. The brand's mission statement says it believes in a culture that provokes discovery and brave thinking, and Calvin Klein launched a campaign in 2014 that was meant to be inclusive of more women.

Plus Size Models in Fashion

For a female model to be considered "plus size," she typically falls between a US size 6 and 14. However, plus size in menswear generally means XL with a chest size of over 42 inches, but it can stretch to anyone who's very tall and well built. Furthermore, the fashion industry has changed its definition of what is considered 'plus size' over the years, so numeric sizes can be deceiving. 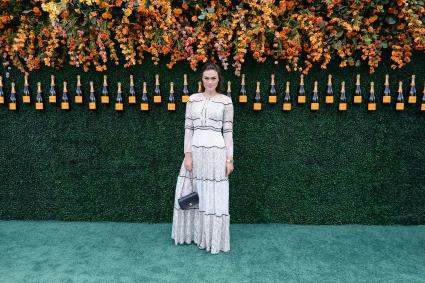 According to Forbes, Calvin Klein used to have women who were a size 6 for fit models; however, this changed four years ago with Myla Dalbesio.

Myla Dalbesio was 27 years old and a size 10 when she was introduced into the Calvin Klein family to star in the Calvin Klein Underwear Perfectly Fit campaign. Other models who featured in the campaign included: Jourdan Dunn, Amanda Wellsh, Ji Hye Park, and the face of the brand, Lara Stone. The campaign aimed to celebrate and cater to the needs of different women, including size 10s. The response was massive.

There was a negative backlash, particularly on social media, after the release of the Perfectly Fit campaign. Though Calvin Klein never actually referred to Dalbesio as 'plus size,' the campaign led to a lot of anger in the media as she was the largest model in what was deemed an inclusive campaign. In women's clothing sizes, misses' sizes usually go from 0 to 12, while plus sizes typically start at 14.

Dalbesio did an interview with the TODAY show and called herself an "inbetweenie." She said: "I am one of many girls who are 'inbetweenies.' We're not skinny enough to be straight-size, like these size zero and size two girls, and we're not big enough to be plus-size." She hoped the controversy would ultimately lead to a dialogue about body positivity in the fashion community.

The Calvin Klein Plus Size Collection

Calvin Klein didn't let the controversy surrounding Myla Dalbesio stop them from using plus size models. In fact, they have a plus size clothing collection featured on their website.

It isn't public knowledge who exactly the current plus size models are for Calvin Klein, but they look fabulous on the website.

Even though there was a lot of controversy over the Calvin Klein Perfectly Fit campaign, it started a greater conversation in the fashion industry about how we should embrace women and, most recently, men, of all sizes in campaigns.

This conversation is still ongoing, thanks to actions like the group of four female plus size models who recreated the Kardashian-Jenner family's Calvin Klein intimates photo shoot in February 2018. It was a message of body positivity to women everywhere.

There was also a similar campaign in March 2018 by four male plus size models who recreated a separate Calvin Klein ad in a mission to change the perception of male beauty. This campaign was created by plus size male model Darnel Ghramm as part of his project #WeAreBigAndTall. It has received extremely positive feedback on social media thus far.

The Plus Size Model Revolution

Calvin Klein is a modern and iconic brand that strives to make a positive impact on the world by embracing tension, sparking ideas, and creating unforeseen realities. Even though it was controversial, they certainly created conversation through their campaign with Myla Dalbesio. It made the whole fashion industry and world think, and today more brands have started including plus sizes within their clothing ranges.